An essential ingredient of Mediterranean cuisine that is ideal for raw consumption.

The Extra Virgin Olive Oil “El Vergerars” is made exclusively with olives produced by farmers of the Salomó Agricultural Co-operative.

It is the perfect synthesis between the land, climate, man and technology; the unification of tradition and modernity.

It takes its name from the most beautiful places of the region, a wild plateau cut by an impressive meandering river. At the base of this imposing cliff there is an opening to a cave that was a cradle for some of the earliest human communities that populated the land in prehistoric times (second millennium BC).

In the Middle Ages (XIII century), the Cistercian monastery of Santes Creus dominated the land; the farmers, under the monastery jurisdiction, cultivated the olive trees in the area known as the Quadra Solana.

Nowadays, the olives are collected directly from the trees using the a manual procedure with combs and nets, and at the end of the day, the olives are taken to the mill where the co-operative’s olive oil is produced through an exclusive mechanical decanter centrifuge that extracts the essences of the fruit,

The mill has a system of continuous pressure washers, grinders, hot beaters and also a double centrifuge. There is also an olive oil packaging machine and temperature controlled storage areas.

Both the grinding system and packaging machinery are made from stainless steel to achieve the highest levels of hygiene and quality. 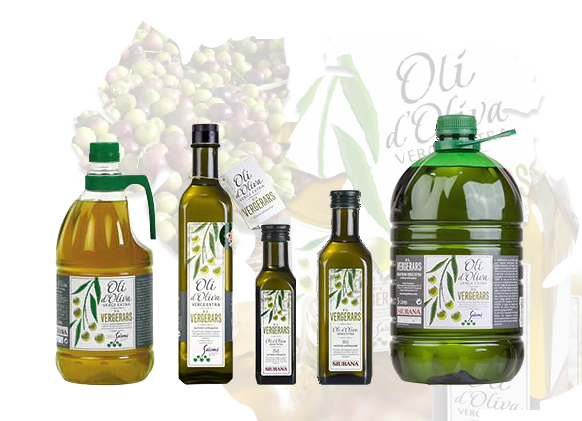 Extra Virgin Olive Oil “El Vergerars” is made exclusively from the Arbequina variety of olives that are produced within the territories of the Salomó Agricultural Co-operative.

Alfa de Salomó Exclusively produced using the finest of grapes from the vintage of 2012 and comprised from the varieties of Xarel·lo, Parellada and Chardonnay, l’Alfa de Salomó.

White and Red Wine · Bag in Box 5L
Salomó Agricultural Co-operative is committed to the elaboration and commercialisation of a young wine in “Bag in Box” format of 5 litres in both red and white variations.

Scroll to top
This website uses its own and third-party cookies to improve your experience. If you continue without changing your settings, we'll assume that you are happy to receive all cookies from this website.I AgreeMore info